Daniel Pinkham (1923-2006) was well known as a composer, organist, harpsichordist, and professor. Although his choral and organ works are the most performed today, his output was extensive, including works for the New York Philharmonic, the Boston Pops, and the Louisville Symphony Orchestra. Pinkham is remembered fondly by his students at New England Conservatory, where he taught renaissance music history and led an early music ensemble. They describe his always-positive demeanor and dry wit. They also recalled his understanding that practicing one's instrument or singing, oftentimes needed to come before music history homework. Pinkham wrote several operas with sacred themes. These include "Daniel in the Lion’s Den," "The Passion of Judas" (a cantata with an Opera in the middle), and "Garden Party."

Garden Party is a one-act chamber opera with mixed chorus. The cast includes Adam (baritone), Gabriel (actor), Eve (soprano), Snake (actor), and Deus ex machina (voice through loudspeakers and electronic sounds).  There is a solo male quartet, the "celestial choir," which could probably be done with a mixed or even all-female ensemble. There is a small orchestration for five players. The mixed chorus work is robust, worthy of an opera workshop that works alongside a vigorous choral program.

In the Boston of the second half of the 20th century, Pinkham was composing alongside the likes of Gunther Schuller and Leon Kirchner. Composers like these were writing thorny and difficult music, much of it influenced by twelve-tone technique. Pinkham is not of that school. His is an accessible, practical, friendly style, certainly not without some complications and challenges. But these are, more often than not, put in the orchestration. There is some helpful doubling of vocal lines, and first pitches don't need to be pulled out of thin air. The music is most definitely tonal and often very tuneful. In sum, the music of Garden Party is a mix of classical and lighter styles and well within reach of an undergraduate or small graduate program.

Garden Party is subtitled “A Comic Opera Based on an Irreverent View of the Garden of Eden.” As we all know, “comic” in opera tends to be a formal definition, perhaps indicating the use of dialogue or the fact that no one dies. But I must say, many of Pinkham’s students fondly recalled his sense of humor, and it shines right through in his opera.

Early in the opera, the Celestial Choir Quartet sings in an old-time-shape-note a-capella-Gospel-Quartet style, complete with a pitch pipe to start themselves off. Their song is based on a 19th-century poem and song, "Read the Bible" by Mary A. Kidder. 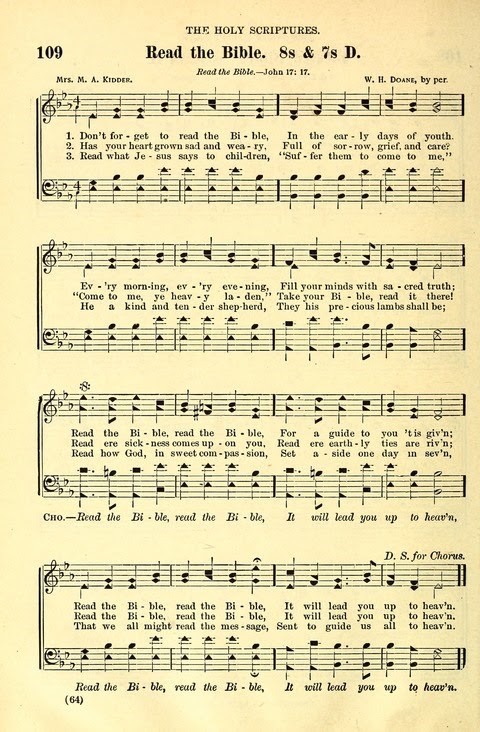 Adam begins with a patter song after Gabriel instructs him: "God said you looked as though you'd like something constructive to do... give names this morning to all the living creatures…." The performance instruction to the baritone is "very rhythmic speech-song. Childlike with a wide variety of inflections."

A is for ape, up in the tree

B is for bobolink, meadow bird free...

And so it goes from A-Z, including some whimsical and fantastical inclusions such as

U is for unicorn, mythical beast

V is for vampire, blood is his feast

Gabriel gives Adam a pill, and when he awakes, Eve is at his side. He immediately suggests they play cards.

Amid this whimsey, not all is irreverence. Over a gentle, two-bar E minor ostinato, Adam and Eve describe the beauty of the garden:

How Beautiful the garden!

Warm the days, cool the nights.

What peace is here!

The trees grow tall in Eden,

Sweet their fruit, soft their shade, their perfumes rare.

The Snake tempts Eve in a dialogue scene:

EVE: God has forbidden us to neither eat or touch the fruit of the this tree; If we do, we shall die.

SNAKE: Come on, Eve. Of course you will not die. God knows that as soon as you eat it, your eyes will be opened and you will be like God, knowing good and evil.

And a little later...

SNAKE: Very healthy, those apples! Keeps the doctor away, you know.

Eve’s aria is used dramatically to present her falling into temptation. In the end she succumbs with the line:

EVE: But fruit so ripe and red, plucked from the tree of knowledge,

Adam and Eve's banishment from the garden is presented seriously. The stage directions say, "Adam and Eve should walk off. Snake should crawl off, but the effect should not be humorous." So while there is irreverent humor in the opera, it certainly comes from a position of respect for the story, text, and traditions of the Bible.

Fortunately, Garden Party is available on a CD from Arsis Recordings. You can hear the finale “Welcome, sin" through the EC Schirmer website or hear the whole opera on Amazon Music. "Welcome, sin" gives you a clear idea of the vibe of the opera. Pinkham's lyrics say it all:

Here on earth joy and mirth on us bestow

In the air, ev’ry where, delight us now.

Unlike Hogwarts' sorting hat in the Harry Potter books, the process of what remains in "the repertoire" is cruel for being so un-inclusive. While many operas are simply the R&D of the field--written, performed, judged, and discarded--there are neglected 20th-century works like Garden Party that performers and audiences can continue to enjoy for years to come. Take a bite!

Computerized notation programs for music (Finale, Sibelius, etc.) were universally adopted by the 1990s. So only about thirty years ago, music was either engraved or published in manuscript editions, such as EC Schirmer's edition of Garden Party. Pinkham's manuscript score is clear, but a tiny bit crabbed, with smallish note heads. Although there is an initial impression of a difficulty in reading, it dissipates rapidly, and one sees how carefully and painstakingly the score is crafted. In short, the challenge of the composer's manuscript score will quickly fall away and ends up enhancing our connection to the writer. 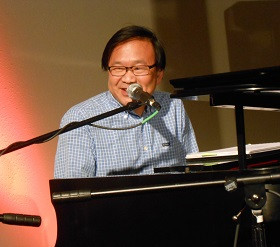 Michael Ching is a composer, conductor, and songwriter. Next season, Towson University will premiere a revised version of his A Midsummer Night's Dream, opera a cappella (2011). The a cappella accompaniment will now also have a small wind-orchestration and additional breath-art material from Towson's artist-in-residence, Shodekeh. His popular opera, Speed Dating Tonight! (over 100 productions) will get its 100th character option, an addition of 75 new options since the 2013 premiere. Speed Dating Tonight! productions took place last season at institutions such as NYU-Steinhardt, UT-Knoxville, Arizona State University, and the Janiec Opera. His 2020 opera, RSBE, had four productions last year, including TCU, Amarillo Opera, Kennesaw State, and Taos Opera Institute. Michael is on the board of NOA, the opera consultant for EC Schirmer Music Publishers, and Composer-in-Residence at Savannah Voice Festival, which will premiere his Cenerentola sequel, A Royal Feast, in 2022. From 1993-2010, Michael was Artistic Director of Opera Memphis. He was a composition student of Robert Ward and Carlisle Floyd. Recently, Michael was a finalist in the Acorn Theatre's 2021 Singer Songwriter competition.