Opera and Musical Theatre in the 21st Century 2014 NYC

The 59th annual National Opera Association convention, held January 9th through 12th, 2014 at the Roosevelt Hotel, was a resounding success!

Opera and Musical Theatre in the 21st Century: Tradition and Innovation Converge 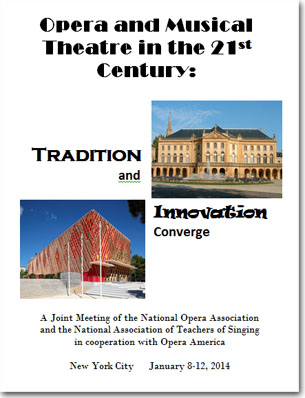 Andrew Lippa is a renowned composer/lyricist whose awards include a Tony nomination, Grammy nomination, the Gilman/Gonzalez-Falla Theater Foundation Award and ASCAP’s Richard Rodgers/New Horizons Award. Lippa wrote the music and lyrics for the musical Big Fish that is currently running on Broadway at the Neil Simon Theatre. Other notable works include The Addams Family, The Farnsworth Invention and The Wild Party.

Victoria Clark maintains one of the most diverse performing careers of any artist living today, equally at home in plays, musicals, film, television, and the concert stage. Clark received a Tony Award for her performance in A Light in the Piazza. Clark studied acting with renowned acting teacher Michael Howard, his protégé, Rebecca Taylor, and continues her vocal training with Edward Sayegh. She has an active teaching career, helping many aspiring actors train their voices for Broadway roles.

Ted Sperling is one of today’s leading theater artists. He is a director, music director, arranger, orchestrator, conductor, singer, pianist and violinist. Sperling received the 2006 Ted Shen Family Foundation Award for leadership in the musical theater and is the Director of the Music Theater Initiative at the Public Theater. He won a Tony Award for orchestrations of A Light in the Piazza.

Stephanie Samaras is a world-renowned lecturer on teaching pop singers. She has been a pioneer in applying healthy classical technique to the training of voices in the pop field. Samaras teaches both privately in New York City, at The CUNY-Doctoral program, and at Montclair State University. Her studio is constantly represented on and off Broadway, on national tours and on recordings.