Remembrance: Jewish Opera and the 75th Anniversary of the Auschwitz Liberation

Commemorating the 75th Anniversary of the Auschwitz Liberation, SIO takes time to revisit three sacred operas written after the Holocaust by American-Jewish composers. Unless disseminated and performed, these and other works like them, though still extant, are at risk to become unknown to current and future generations. They are of great significance to world culture, bearing witness to natives and immigrants, who gave new voice to historical liturgical and traditional functions post a period of religious persecution and horrific acts carried out in the name of ethnic cleansing.

A Golem, as found in Jewish Folk superstition, is generally thought of as a mythical creature conjured through the magic of holy names. A belief in the creative power of speech and letters in the Hebrew alphabet, takes the word Golem from its mention in the Bible (Psalm 139:16), and though open to interpretation, is often understood as meaning body without soul. Ellstein worked closely alongside his wife, playwright Sylvia Regan, who together devised the libretto loosely based on the Yiddish play of the same name by Halpern Leivick (1886-1962) with other ideas taken from various sources on golem legends. In Ellstein and Regan’s libretto, we see a golem made of clay, in which a divine tetagram with the letters of God’s preeminent name (shem ham’forash), animates the lump of clay which is later imbued with supernatural powers bestowed by God to protect the Jewish people from its enemies.

It was Julius Rudel who intrigued by the idea of an opera inspired by the Golem myth, secured the opera’s commission and subsequent premier in 1962 at New York City Opera. Through the utilization of 20th century techniques, Ellstein sought to find a more universal sound that could capture the antiquity of this tale.

Hugo Weisgall’s love for the singing voice and for theater, fueled a generous output of important works in the canon of postmodern American opera. He served during the second world war as an aide-de-camp to General George F. Patton, and as a military official, assisted many refugees and concentration camp survivors from escaping communist lines. Later in life, Weisgall went on to teach at The Peabody Conservatory, Queens College, the Juilliard School and Jewish Theological Seminary, where he was chairman of the Seminary’s Cantor’s Institute.

With a libretto by Charles Kondek, Esther, Weisgall’s last opera, is loosely based on the Biblical account of Queen Esther, who acts as an intermediary, blocking the imminent genocide of the Jewish people. It is a large-scale work with eleven principal roles and 2 choruses. The work was premiered as part of New York City Opera’s fiftieth anniversary celebration in 1993. Of the libretto, Scholar Neil W. Levin states, “Parallels are drawn to contemporary issues and concern—especially Jewish identity in modern society and moral reflections arising out of post-World War II sensibilities with regard to defensive war for national survival.”[1]

This full opera in 3 acts, by Leonard Lehrman with a libretto by Orel Odinov Protopoescu, pulls elements from 87 bibliographic sources capturing a host of variations on the legend of Hannah the bride, who publicly tearing offer her clothes on her wedding day, ignites civil war among the Macabees. Hannah received its New York Premier in 2014 at Hebrew Union College Jewish Institute of Religion. Leonard Lehrman is the composer of eleven other operas and six musicals. 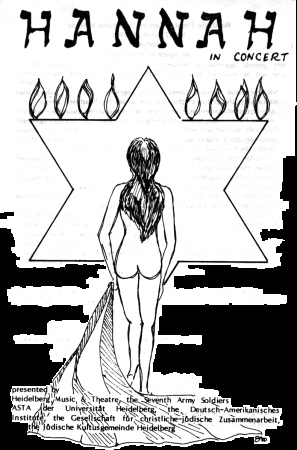