The Passion of Christ should not be acted out in words and pretense, but in real life. - Martin Luther

When addressing how the Passion text should be set to music, Martin Luther insisted that the use of elaborate polyphony would distract from the importance of the  narrative’s message. Nevertheless, before and since Luther's time, countless composers have utilized a variety of polyphonic means by which to depict the Passion story. Dr. Philip Seward is now among those composers who have set the Passion in ways that interplay with operatic theatrical expression.

The Gospel of John was Seward’s scriptural inspiration for the underpinnings of his new opera girded by a co-written libretto with theatre director, Joan Mazzonelli. Seward, a long-time member of the NOA, has amassed an impressive portfolio of repertoire for the voice which includes opera, musical theatre, art song, chamber music, and choral works. He is a Professor of Instruction at Columbia College Chicago and , heads the Music Lab at writingmusicaltheatre.com which works in conjunction with the Academy for New Music Theatre in Los Angeles. He has served sacred spaces in a variety of capacities, and currently holds the esteemed position of as music director at Epiphany United Church of Christ in Chicago.

Much of Seward’s compositions have come to fruition through commissions, but The Passion of John is a work he chose to embark upon for his own artistic and spiritual exploration. Seward first drafted a shortercversion of The Passion that focused solely on the last days of Jesus’ life. Shortly after a workshop of the opera’s initial permutation, he began the monumental task of expanding the work, which now presents St. John’s complete narrative on the adult ministry of Jesus.  Seward’s latest version of The Passion of John is hot off the presses and now waiting to been produced.

It is important to note, that in addition to his authority as one of today’s leading American composers, Seward is an accomplished singer and collaborative pianist whose years of experience inform the way he appropriately addresses the challenges and pitfalls found in voice classifications. Seward also looks after maintaining the text’s intelligibility, setting words in the necessary vocal ranges needed to ensure clarity of diction.

Although it has some rhythmic and tonal areas of the work will challenge even the most highly skilled vocalists, alongside those more accessible sections plentifully found throughout the piece, these complex areas serve to provide an exciting look at the life of Christ through a new set of lenses. In order to compliment the ancient Passion text, Seward thought it fitting for some of the musical ideas, to derive from more ancient conventions.

His use of rhythm, texture and harmonic treatment are somewhat reminiscent of Arvo Pärt and Henryk Góreckiz, composers who Seward acknowledges as highly influential to his output. The release of sound and the wash of it coming back is part of the musical framework, as is the use of language for creating rhythmic sound. Extended vocal techniques are used such as whispering of text, the blowing of air from the mouth for wind effects, and ad lib layering of tone clusters to underscore spoken narration. The instruments are largely independent from the singers, functioning with their own voice. However, when helpful, Seward has them double the vocal lines with pitch references. The sounds he has created using mediated (electronically enhanced) instruments help bring this drama even further into a contemporary soundscape.

When casting, directors may feel tempted to engage a choral ensemble. However, choral singers may offer a distinctly different sound than that of quality solo singers in a grouping. It is the more sonorous quality of the latter that Seward has expressed he wishes to see assembled for performance.

The theatrical scope of Mazonelli and Seward’s libretto also merits our strong consideration.  Seward’s love for pairing words with melody shines through his setting of the Passion language to seraphic music. The composer/ librettist team hopes that their setting of the St. John narrative offers a fresh perspective of the Passion text for the twenty-first century. They wish to emphasize that the work should not be classified or treated as an oratorio. Seward categorizes The Passion of John as a full-length ensemble work intended to be staged. There are stage direction suggestions imbedded in the score as well as clear indications for movement and lighting.  Seward has envisioned that this work may best be experienced in large cathedrals or other sacred spaces with contemplative acoustical beauty.

Interestingly, given the opera’s well-organized framework, the work could also be produced in smaller sections that are self-contained to good effect or as a complete new work.  In other words, scenes could be extracted for worship services or opera workshop scenes programs.

I asked Philip to share a little on his concept for a performance venue and he states:

The ideal environment would be to have the opening text ["In the Beginning"] metaphorically emerge from a darkened stage. Sound is very important–the specific percussion sounds, the mediated instruments, and then the voices should all emerge out of the dark. The Passion has a near a cappella sound overall...The human voice stretches back in time to the origins of the text and is central to the soundscape. I can also imagine a production where sound comes from multiple places, in a mix of light and dark, on a nearly bare stage. The overall mood varies, from the bright, hopeful conclusion of the first scene, to the dark sound of scene three.

My hope is that soon Philip Seward will have the opportunity to witness the premier of The Passion of John in a suitable space filled with capable musicians and an appreciative audience.  The Sacred in Opera Initiative congratulates Dr. Seward on so successfully contributing to the canon of sacred music-drama.

Below is additional information provided be our composer that provides further information for producers addressing further logistical considerations.

From the Score’s Forward:

The Passion of John is adapted from the Revised Standard Version of the Gospel of John.  The work plays out in seven scenes and is set for fifteen solo singers: three sopranos, three mezzos, three altos, three tenors, and three bass-baritones, a speaker with resonant low timbre and dramatic ability, plus flute, guitar, cello, chimes, and percussion..." (orchestra chimes, wind chimes[mark tree], timpani, and cymbal)…Each of the instruments should be amplified to balance the sound of the voices. With individual amplification a delay patch may be employed of two to four seconds (depending on the performance space) for each of the instruments. The use of such a delay is indicated within the score.

Threat (from the Pharisees)

The sections of this work are self-contained in about ten-minute scenes that could be performed independently from the whole.  The exception is the second, which is longer and includes six signs and wonders that Jesus performed during his ministry.  The section on Testimonials is for nine trebles, sometimes each singing an independent line that could easily be excerpted.  Role reversal occurs with some of the male characters refreshingly sung by women. The characters are assigned as follows:

Seward's setting of the Passion includes: Unison singing of all 15 singers, solo movements with melodic passages underpinned by repeated phrases from other voices (sometimes in tone clusters as well as more consonant sections which are quite lyrical). A non-singing actor also serves as a narrator. 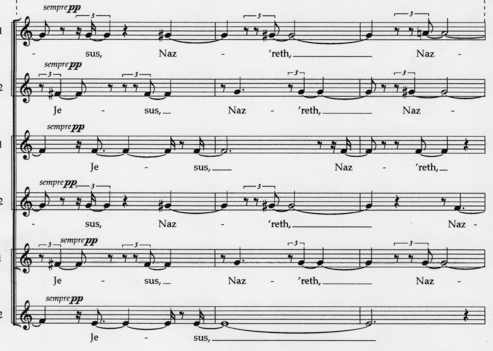 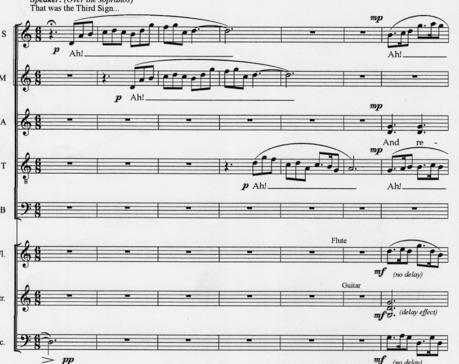 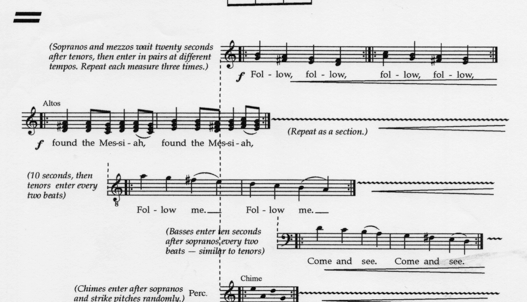 Soprano Susan McBerry, lyric soprano and teacher of voice and coach/accompanist, has been the coordinator of vocal studies at Lewis and Clark College since 1987. She teaches Art and Science of the Voice and Vocal Literature in addition to private voice lessons. She also directs the Opera Workshop and Musical Theater Workshop. As a vocal coach and conductor, McBerry has provided vocal and music direction for plays and musicals at Lewis and Clark, student compositions, operas and opera scenes.   In her tenure at Westminster Presbyterian Church in Portland where she is now Director of Music Emerita, she produced and directed sacred opera and oratorio for twenty years. In addition to being on the Sacred in Opera committee of NOA, Susan has been a member of NATS as Cascade Chapter president, Oregon's district governor and NW Regional Governor.