The Sacred in Opera Initiative recently hosted a celebratory plenary session at this year’s NOA Conference in New Orleans, honoring the life and work of composer Susan Hulsman Bingham– who the National Opera Association proudly honored this year with the Sacred in Opera Lifetime Achievement Award. Highlights from six of Bingham’s many operas were performed by students from the University of Delaware. The event was moderated by Dr. Michelle Louer, and directed by Dr. Isai Jess Muñoz (SIO Chair), Dr. Samuel Mungo (Peabody Conservatory), and Dr. Blake Smith (University of Delaware). The NOA Sacred in Opera Award serves to honor and shed light on those individuals whose work has been instrumental in shaping a clearer definition of what defines “sacred” in opera. In line with the mission of the Sacred in Opera Initiative, the nomination and review of candidates for the award were conducted by members of the SIO Committee with a positive awareness of religious diversity and the intentional practice of engaging people of different faiths for the betterment of our organization and society as a whole.

For over 40 years, Susan Bingham has committed her talent, passion, and creative energies into telling the stories that shape and reflect our common humanity.  She has breathed vibrant life and invited audiences into full engagement with ancient manuscripts of the Talmud and the Hebrew Bible, centuries-old folktales and fables, and venerable liturgical rites. In this way, Bingham extends the trajectory of Handel, Britten and other composers in employing sacred story for dramatic musical inspiration.

With degrees in music from Sarah Lawrence College and the Boston University School of Fine and Applied Arts, and advanced studies at Yale University, Susan was well on her way as a concert pianist.  But her career path took an unexpected and welcomed turn. An invitation from a friend to set his favorite Psalm text to sing at church revealed Susan’s innate compositional talent, and led to what would become her life’s work.

Susan soon began composing choral anthems, mass movements, psalm settings, and children’s and liturgical opera.  The operas were conceived to be used in place of a sermon during worship services in churches and synagogues.  Lasting approximately 20 minutes each, the Sacred in Opera Lifetime Celebration featured scenes from six of Bingham’s “chancel operas.”

By 1984, Bingham’s vocal works had gained regional renown and popularity. The informal Trinity Players in New Haven who performed many of these early operas, became the Chancel Opera Company of Connecticut.  Drawing on local talent, the Opera Company toured extensively.  In 2005, after a move to Pennsylvania, Bingham adopted the current name of The Children’s and Liturgical Opera Company to reflect the now extensive and diverse catalogue of her compositions which include 18 chancel operas, 10 chamber operas, 3 full-length operas, in addition to other significant pieces.

Four of Bingham’s operas have been broadcast on NBC TV. She has been invited on 3 separate occasions to appear at Lincoln Center New York City under the auspices of Meet the Composer, and has received numerous grants for her work, including The Connecticut Commission on the Arts, The New Haven Fund for Arts in Education, and Meet the Composer: New Music for Schools.

Her dedication to community outreach and education through her work with children is notable.  Rather than making a cameo appearance as part of a larger “adult” opera, or writing operas to be performed for grade-school audiences, Bingham integrates children not only as performers, but as co-creators.  Her work for 20+ years at Worthington Hooker Elementary School and the Foote School in New Haven allowed Bingham to unleash the creativity in children. She welcome children to collaborate together in writing libretti (Anniversary Tales, a collection of short folktale operas from around the world) and in devising compositional structure (the Plains Indian tale The Legend of the Bluebonnet).

We see that Bingham’s work exemplifies both what it is to honor tradition and the historical evolution of the church’s liturgy in interplay with opera, all while composing new liturgical operas that serve to re-visit and revive historical practices for post-modern audiences.  Her service in our field has included years of outreach that took time to address the needs of some of our most innocent and fragile citizens, inner-city children and youth.  Through a variety of commissions her work also made it a point to lead conversation in Interfaith and LGBTA equality.  She has done this work not in spite of her religious beliefs but because of them.  Bingham has most unapologetically presented ideas that aimed to help people make better sense of their worlds and their responsibility within them. It is for these reasons, that unquestionably, Bingham’s life-work has exemplified what it means to be one of the National Opera Association’s Sacred in Opera Lifetime Achievement Honorees. 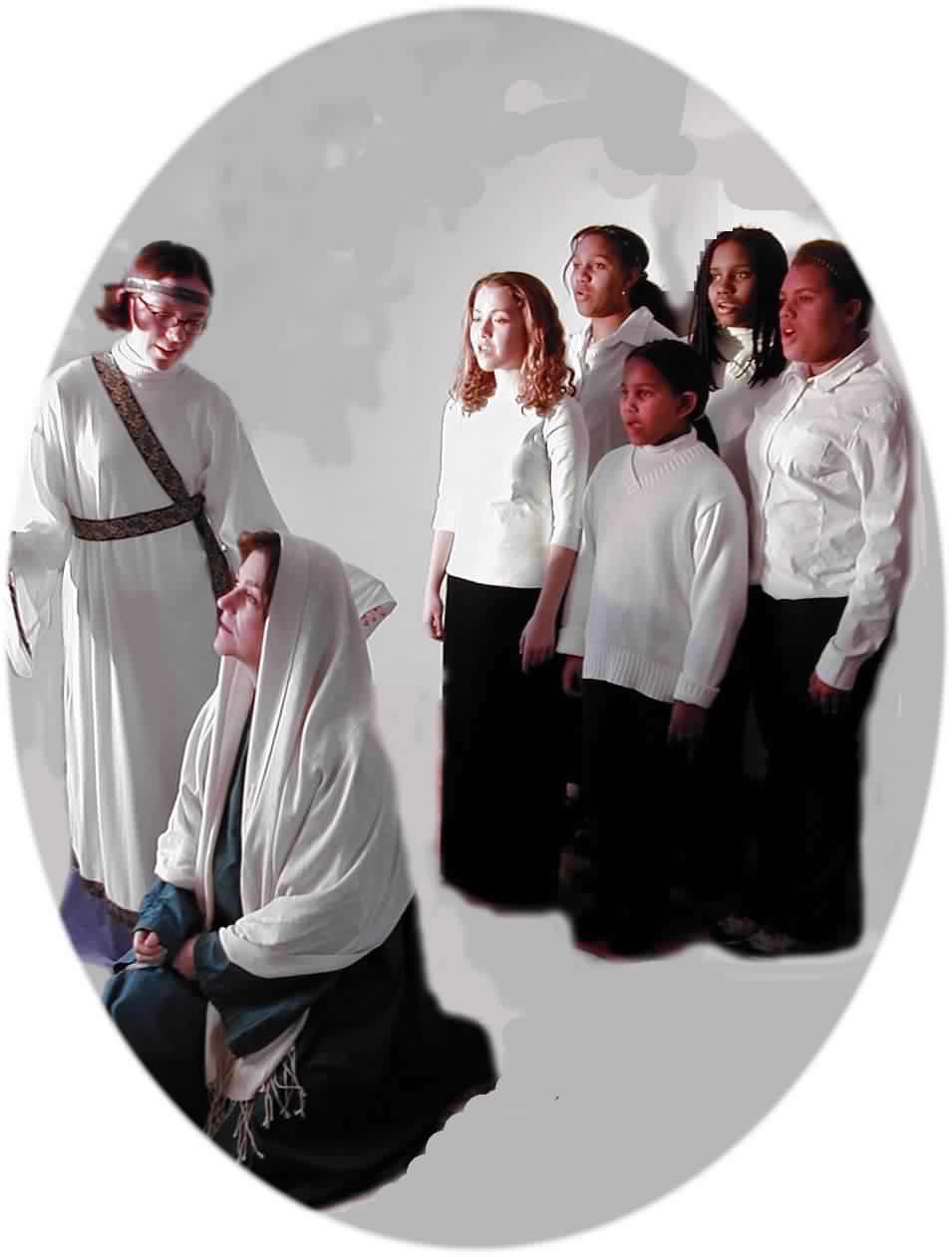 To inquire about Susan Bingham’s full library of works, you may visit:  www.ChancelOpera.com

Susan Bingham's music . . . enhances the scriptural stories she wishes to bring to life. . . The (Children's and Liturgical Opera) Company is a first-rate troupe. Because of the nature of their work, their performances belong most effectively in a worship setting. Lively, compelling and faithful portrayals of Biblical characters and stories greatly enliven any devotional service.

The music (for the chancel opera PIECE TOGETHER) was splendid, the drama moving. The work is an extraordinarily effective interpretation of Mark 5:21-43 . . . Your attentiveness to the socio-historical setting, the literary context, and the dramatic structure of the passage . . . made the text come alive in a compelling way. . . Your opera embodies precisely the sort of retrospective narration out of which the gospel traditions grew . . . In short, the opera was an exemplary piece of exegesis . .

I had the delightful surprise and privilege of hearing Susan Bingham's A CONVERSATION BETWEEN MARY AND THE ANGEL GABRIEL (at St. Peter's Church, Citicorp Center, New York). It is a beautiful piece of music . . . The congregation burst into prolonged applause at the conclusion . . (and this is) highly unusual and was much merited.

I cannot tell you how moved I was by your presentation of ON THE ROAD TO EMMAUS. Everything about it was superb in its feeling and beauty. I found myself welling up with inexplicable tears as I sat so close to the supper table at Emmaus .