LUTHER: An Opera by Kari Tikka

NOA Past President and the Sacred in Opera Initiative's founder John Pfautz, took time to this past December to converse with Kari Tikka, Finnish composer, conductor, teacher at the famed Sibelius Academy, performer, Lutheran, family man, and composer of the opera Luther.

It was at the National Opera Association’s 2006 convention, early on in the days of NOA’s Sacred in Opera Project, that I met Kari Tikka and his wife Eeva.  They were in New York City for appointments with several musical and ecclesiastical people trying to arrange performances of Mr. Tikka’s new opera Luther.  Like any self-respecting composer, Kari carried with him a case that included videotapes and flyers meant to give a thorough introduction of this full-length opera.  I was fortunate to be handed the promotional materials.[1]

At the time, I was immersed in gathering as many titles and as much information possible on any operas that deal with sacred themes, events, or important religious figures.  In addition to serving my own interests, I was assisting Carl Gerbrandt expand his annotated bibliography Sacred Music Drama, the Producer’s Guide, for which Carl was preparing a second edition.[2]

I was impressed and intrigued by meeting Kari for at least 3 reasons:  1.  Kari is a warm, genuinely gracious and generous soul.  I have been blessed to meet a number of these people as NOA has more than its share of “old souls.”  I imagine that, like me, you remember well those special people.  2.  Yes, yes, yes, I am interested in sacred music drama of all sorts, always hoping to produce new works or to encourage others to consider producing them.  3. I was then directing the opera program at Augustana College, an Evangelical Lutheran Church of America affiliated institution.  I had been producing Christmas-themed operas on campus for a number of years and our ecumenical audiences responded well to the sacred themes previously presented.  I am still wondering if now is the time to mount a production of Luther in the Quad Cities. 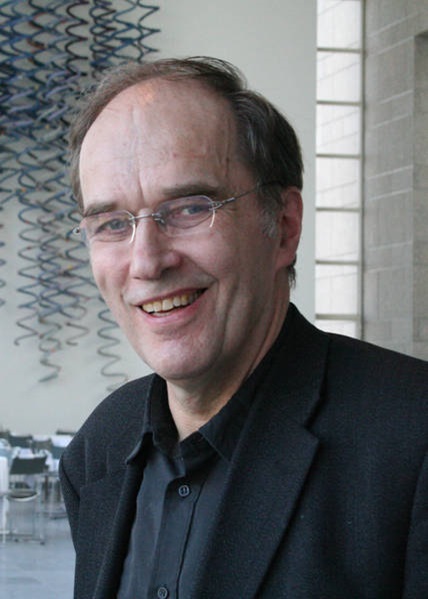 Readers of the Sacred in Opera Newsletter will not be surprised to read that there are people who find spiritual connections with many operas that may or may not normally be labeled as sacred music drama.  The SIO Newsletter editors have tried to avoid publishing articles that might be interpreted as narrowly exclusive, or offensively aggressive in its presentation of religious material.  There is the danger, on the other hand, in an effort to find language and themes that are universally acceptable and non-offensive that we may miss out on coming to understand the real value of an operatic work or the core values on which the composer and librettist sought to comment.  For this reason, I choose to take this opportunity to write about Kari Tikka and his opera Luther.  This should not surprise you considering that 2017 is known as the 500th anniversary of Martin Luther nailing the 95 Theses on the church door at Wittenberg, Germany, which is generally considered the start of a series of events leading to the Protestant Reformation.  Additionally, 2017 is the 100th anniversary of Finland’s independence from Russia.

Sacred in Opera Initiative: The Lutheran Church of Finland is very strong with about 4 million members, making up about 72% of the population.  (In comparison, approximately 7 million people identify as Lutheran in the US, which is about 2% of the population.)  It seems that choosing Martin Luther as the story and theme for an opera in Finland would not be a particularly surprising idea.  Are there other reasons for your choice of this subject?

Kari Tikka: All my youth I had struggled seriously how to be in a good relationship with God.  I thought that I have to please God or at least make a decision to take Jesus in my life.  That kind of religion did not give peace.  And when my life collapsed in divorce and with many disappointments in my professional life, I got as a gift from heaven, St. Paul’s words:  “When I am weak, then I am strong.”  I don’t have to succeed, God’s grace is enough!

The line from St. Paul to Saint Augustine, to Martin Luther seems to be my way.  I started to read Luther and what was written of him.  As I have worked all my life in opera, gradually I started to think of an opera on Martin Luther.  I made the libretto with some help from my friend the director Jussi Tapola.  My effort in this opera was to be historical, but still more to focus on Luther’s main theme: Freedom!  And, I wanted to represent Martin as a normal human being – not as a statue, like the one that appears in the end of the opera.  I wanted to ask – where do we have Luthers today? 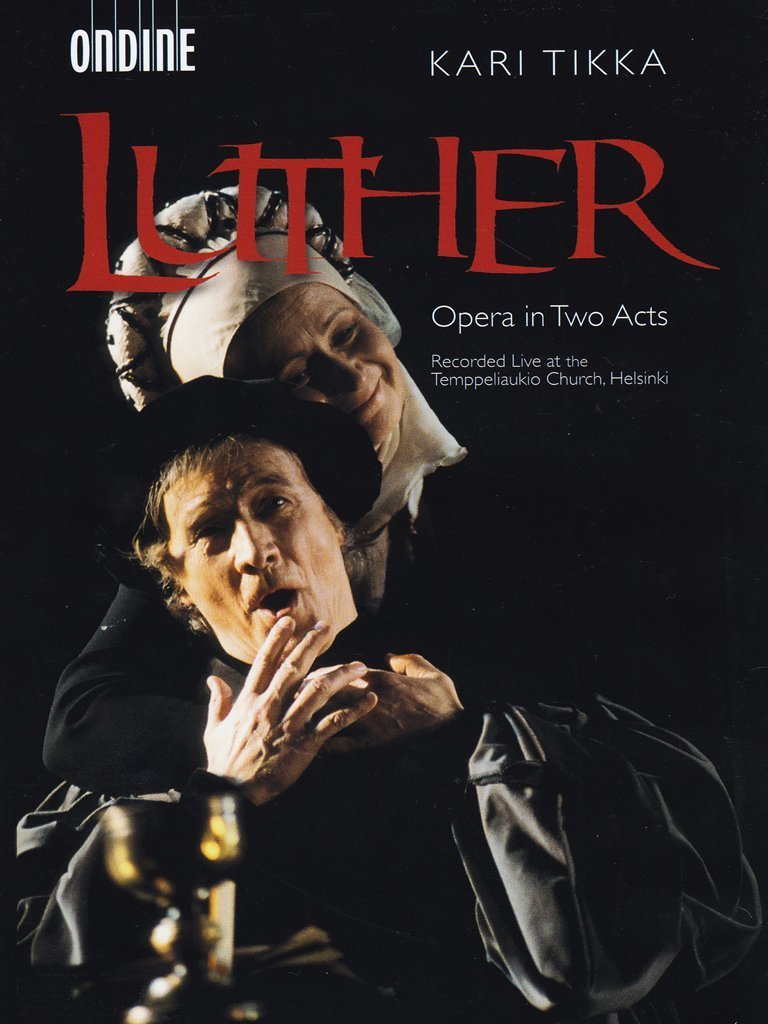 SIO: One of the many interesting facts about Luther’s life that is brought out in numerous biographies, is how Martin struggles with the devil.  You presented that struggle prominently in the opera.  Can you explain further?

KT: According to Luther, mankind has five strong enemies in its eternal Dance of Death:  Devil, Death, Sin, Law, and Hell.  We can’t win them, but Jesus Christ has won them on the cross and He gives us victory.  I wrote the other major role to the Devil, also the other four are personified in my opera[3]

SIO: What can you tell us about the location of the first performances of Luther?

KT: The premiere was in the Rock Church (Temppeliaukion kirkko) in the center of Helsinki.  This church has been our church all the years from 1969 when it was built.  My wife Eeva worked there as a pastor.  The church is also a very good place for music and theatre.[4]

SIO: The inclusion of singing by the audience/congregation within the opera performances must have been particularly moving in the strikingly beautiful environment and acoustics of the Rock Church.

KT: Finland is very Lutheran, but of course the knowledge of Martin Luther and what he has done is quite poor nowadays.  That was one reason to compose this opera and to have it performed in Finland.  Fortunately, Luther has been performed about 40 times now, in four towns in Finland, in Wittenberg, Berlin, and Wangen Germany, and at Central Lutheran Church in Minneapolis.

SIO: Martin Luther has had a significant impact on your personal and professional life, now almost 500 years after his death.  How would you describe Kari Tikka’s spiritual journey?

KT: Here are the basic pillars in my life: the Word of God, prayer, the Holy Eucharist, the local congregation at the Rock Church, and of course, my family and music.  This all in Lutheran Finland, now 100 years independent!

KT: I am currently seeking funding for the first performances of my new opera Love is Strong as Death.  It is an allegoric work that goes through The Salvation History.  The main characters are Adam and Eve.  In the second act New-Adam.  Eve is the bride - congregation.  The main themes are hope, God´s omnipotence and love, even when He gives hardships and seems to forget us.  The libretto is mine.  There are two acts, 9 soloists, choir, children´s choir, with full orchestra.  I am trying to get performances in the Old Opera House of Helsinki in 1-2 years from now.

SIO: Thank you for your faithfulness to your vocation.  Your compositions and words inspire us.  May these works inspire many for generations to come.[5]

[1] The 2004 Audio Recording and DVD release of Luther, An Opera in Two Acts by Kari Tikka is available on the Ondine Classical Recording Label. Visit: http://www.ondine.net/?lid=en&cid=4.2&oid=587

[2] This text can still be purchased online by visiting: https://www.authorhouse.com/Bookstore/BookDetail.aspx?BookId=SKU-000225038

[3] For the cast and orchestra requirements as well as the libretto in English, visit this link: http://www.karitikka.com/luther-libretto-in-english.html

[4] You may visit this link for an introduction to the Rock Church: https://en.wikipedia.org/wiki/Temppeliaukio_Church

Dr. John Pfautz serves as Chair of the Division of Fine and Performing Arts at Augustana College in Illinois. Additionally, In 2005, Pfautz began teaching church music courses and directing sacred music drama at the Nigerian Baptist Theological Seminary in Ogbomoso, Nigeria. John Pfautz actively teaches and researches church music in Nigeria, Ghana, Tanzania and Kenya.  He has recently created a 3-year certificate program - Church Musicians’ Training – for local church musicians in Kenya who cannot attend university, Bible College or seminary, to study music and worship to better serve their congregations. Pfautz is a past president of the National Opera Association.